Friction: Your Best Friend on Earth 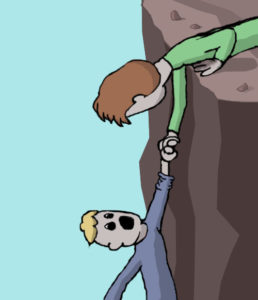 A common animation scenario involves two characters pulling toward one another, as in a rescue scene. Understanding the part gravity plays in such actions is key to animating the scene with enough realism to keep your audience engaged in the story.

The ground. Though it might sound trivial or idiotic to say, the ground pushes back on objects and your body to prevent them from moving toward the center of the Earth.

Friction. Friction is a sort of glue that keeps objects from sliding off one another. When you walk up a hill, the friction between your shoes and the ground keep you from sliding down the hill (toward the center of the Earth).

The laws of action and reaction tell us that the only way one character could stay put and pull the other toward him is with the use of friction. The stationary character uses the friction between his body and the ground to counter the force of pulling on the other character. 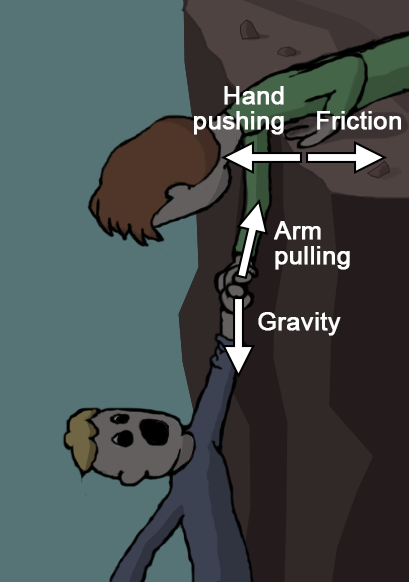 To understand this, consider a character trying to pull another character toward him. The only way the first character can stay put is if he has a hand or foot (or some other body part) braced against an immovable object like the ground, and can get enough friction to counteract the force he uses to push against that immovable object. Without such friction, he’d never be able to counteract the force of his arm pulling at the other character. In our scenario with the character at the top of the cliff, without friction he’d just slide off the cliff and join his dangling friend.

So while gravity is responsible for causing objects to fall and accelerate, it also gives us friction. The effects of gravity, and the use of friction to counter it, can make for some of the most interesting, suspenseful, and exciting moments in animation.

Physics for Animators covers this topic in more detail on pages 98-101.