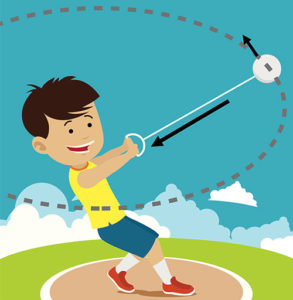 You are probably familiar with the terms speed, velocity, and acceleration in everyday language, and perhaps you have even used them interchangeably. In physics, these terms have precise definitions and are expressed in a certain way.

Speed is how fast something is going, regardless of its direction. It is expressed as distance per time. Common expressions for automobile speeds, miles per hour (MPH) and kilometers per hour (KPH), are examples of speed expressions.

In physics, we substitute the slash symbol (/) for the word “per”. Thus, miles per hour becomes

In everyday language, we use the terms speed and velocity interchangeably. But in physics, velocity is speed plus a direction. While 55MPH is a speed, 55MPH North is a velocity.

The concept of velocity is important with certain types of motion. For example, when you swing a ball on the end of a string, the ball might be going at the same speed the entire time. But because its direction changes constantly, we say that its velocity is changing.

It’s important to know when the velocity is changing because such changes indicate that acceleration is taking place.

For acceleration, we multiply the last two time units together (sec * sec) and express this as sec2. So the expression for this degree of acceleration is 10m/sec2.

This might seem kind of crazy. How do you square a second? You can’t. But this expression works when doing acceleration equations, so scientists use it. It might help to think of sec2 as “changing really fast”.

Acceleration can also be defined as any change of velocity. This means that the ball on the end of the string can be said to be accelerating, since its velocity is constantly changing.

You can learn more about speed, velocity, and acceleration in the Motion and Timing chapter in Physics for Animators.